DR Games is a small independent game designer and publisher. They consist of Toby Lancaster and his family forging their way through the game design industry. They are on a mission to produce narrative driven games but how did their own story begin?

Toby Lancaster is the creative director at DR Games. He studied a degree and masters in fine art and spent many years teaching art. He stumbled in to drawing maps one day when he was randomly sketching out a crypt. Pleased with the way it looked he set up a Twitter account, posted it and was surprised to receive a really positive response. This was mainly under the guise of Dark Realm Maps. His work has appeared in many books and products but after a while and through his own experiences, he expanded out into writing supplements and self-published these through DrivethruRPG and DMsguild. Toby’s background was all about gaming. Having run many roleplay systems over the years, sunk thousands of hours into strategy games and having been and always will be an avid board gamer he found this progression to game design a natural step forward.

Of course, now it was more than just Maps so Dark Realm Roleplay was created and soon to follow that was Dark Realm Games or DR Games as it is known. Toby wanted three distinct areas that could be easily recognised, giving a clear message of what could be expected from the three areas, i.e. Maps, Supplements and Games.

Out of Dark Times

The opportunity for DR Games came out of the pandemic times. Toby wanted to create a Solo game for people at home and of course it was a product that launched DR Games but one that was also inspired by a need and a hungry population stuck at home. Kickstarter provided a platform and were calling for such content. They got behind DR Games and Dark Force Incursion, the solo hex based, print and play game, was created in 2020. This was officially their first product, although they had dabbled with a board game, and was successfully funded. 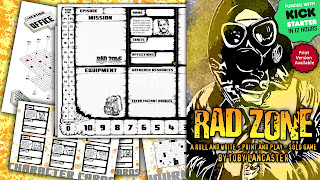 Rad Zone (2021) was the next DR Games product and one that was far more complex but tapped into the same group of gamers. A solo market now used to playing these games but one that potentially wanted new more involved experiences. Rad Zone was successfully funded on Kickstarter and was viewed as an overwhelming success for DR Games. What it did was establish an expectation of quality that will now be carried forward into their future games.

DR Games and Dark Realm Roleplay will keep making games and supplements. They support each other through sister Kickstarter accounts, working together to create a business model that shows steady growth. Toby, Jo, Kai, Tate and Ivy are a creative bunch with big aspirations and having an exciting schedule planned out for the rest of 2021 and 2022.

DR Games is a family affair.... 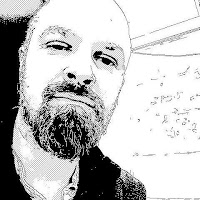 Deeply rooted in rpg, tabletop games, popular culture and art and design Toby has been involved in gaming in some shape or form for over 35 years. He studied Fine Art at university and then went on to do a masters degree, specializing in illustration and painting. Toby is also the ENnie nominated and published cartographer from Dark Realm Maps.

"We want to create narrative based games that take you to fantasy and science fiction worlds and provide you with a way to escape."


Jo - Logistics Manager and wife of Toby who is largely responsible for keeping him in order and managing the technical side of distribution, quotes and play testing. Her input into the creative process is invaluable for Toby.

Kai - Colour Artist and teenage daughter of Toby and Jo who is starting University in September 2021 to study Concept and Comic Art. She specializes in digital colouring and play testing.