The world faces a terrible apocalypse. Without warning, the sun’s radiation spiked to alarming levels, and under this relentless and deadly barrage, humanity succumbed. People fell ill and millions died. Populations moved underground into fortified Rad Bunkers as the sun pushed people deeper into the darkness. Many plants and animals perished, and society collapsed. Food and clean water were rationed until people began to starve, and martial law was replaced by irradiated outlaws and bandits who roamed the surface, looking for some means of survival. 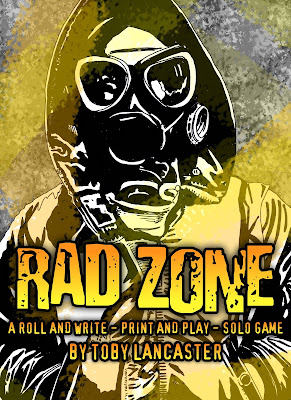 Rad Zone is a roll and write, print and play solo game set in a harsh future where you manage a group of survivors. They live in a Rad Bunker and strive to keep their home stocked with food, water, medical supplies, fuel, equipment, and raw materials. They must go on dangerous missions and salvage these much-needed items from nearby locations, at the same time avoiding bandits who roam the land in their radiation-induced craze. On top of this, they must be quick to avoid taking a dangerous dose of radiation.

What you need to play

Rad Zone uses a D6 (six-sided dice) system. You need at least three dice to play, of three different colours. You will also need a pencil and eraser and to print out the sheets to play. These include the Rad Bunker Roster, an Episode Sheet, Character Cards, Journey Charts and Location Sheets.

Rad Zone is a solo player game which revolves around a series of printable sheets. These are adjusted and updated while your characters are on missions. A mission sees one of your people head out and salvage resources for their bunker. A game session is played with one new character or one selected from the Rad Bunker Roster, a character you played before survived a previous mission. They will be experienced and consequently will have additional useful traits. The policy of the bunker is to send one person at a time in order to limit the level of radiation poisoning within the survivor population, as well as reduce casualties.

Rad Zone was successfully funded in May 2021 on Kickstarter.

If you are interested in ordering a copy, incase you missed out on the Kickstarter, then please email jo@drgames.co.uk