We have just recently launched a new projected on Kickstarter called The Bones of KalKratha. This is our first Roleplay Kickstarter. I’m going to talk about how this fits into our business model that so far evolves around making our own games. 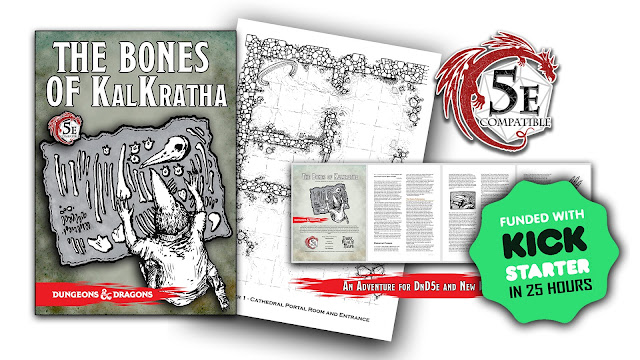 I have always taken a great interest in Dungeon and Dragons. I played it from the age of ten although admittedly I took a long break while I traveled and my children were young. Through Dark Realm Maps, the forerunner to the company, I created maps for fantasy games and became embroiled in these fantasy worlds and it was not long before I started writing as well. Some of these went up on DMsguild and I realised a larger product was on the cards. So, I combined the maps and the writing to create my first roleplay based Kickstarter under my Dark Realm Roleplay banner a sister to Dark Realm Maps and DR Games.

This is basically an expansion of the company model. The way we see things moving forward is to have some clear division between the branding. There are three distinct areas in the Dark Realm

We really did not want to mix up the branding as the names are quite specific. So, for example the Bones of KalKratha is a Roleplay adventure and I did not want people to think this was our own game. Instead it uses Dungeon and Dragons fifth edition rules and is an adventure set in that extremely specific world.

The Dark Realm group is expanding. I realistically want to make this my full-time business and to do this I am creating a model that involves a range of products and some of these will be a series of Roleplay Books. I do a lot of commissions as well, which is great and work full-time as an art teacher which I want to move away from. I also have a great Patreon Page that supports this expansion.

Part of the strategy is to work with Kickstarter. As you are probably aware, we recently had Dark Force Incursion the solo, print and play, roll and write game successfully funded and this showed us the power of the platform. We have a number of other games in the pipeline and each one has been carefully planned for a staggered release. Yes, so that is maps, modules, and games. It seems a lot, but we mean business and you guys are the foundation to this. We really appreciate your support!
So, what is The Bones of KalKratha. It is an adventure broken into four chapters. The main adventure is sold through the Kickstarter campaign. I won’t waffle on about it too much as you can read about it at the Kickstarter page here: (It has already hit its target so backers will definitely receive the Adventure)

https://www.kickstarter.com/projects/darkrealmroleplay/the-bones-of-kalkratha-an-adventure-for-dnd-5th-edition
If you have any questions, then please let me know here.
Awesome!
Toby from the Dark Realm

March 27, 2020
It has been on my mind for a while now as the Corona-virus spreads across the world . What can I offer those who are at home and unable to partake in their usual gaming sessions because of isolation. How can a creative mind help alleviate the stress of boredom and worry? I have seen other roll and write games and thought that might be a great way of giving something to the community to these very ends.    Looking at what I have previously worked on under the DR Games and the hex tile has been a feature. I decide that I would try and use this format, combine it with a number mechanism and inject it with a narrative. This became a scenario that fuel the fire of the story...and Dark Force Incursion was born.   " Y o u r l a n d h a s b e e n i n v a d e d b y a p o w e r f u l D a r k F o r c e . T h e s p e e d o f t h e i n v a s i o n w a s f r i g h t e n i n g , a n d t h e y h a v e t a k e n a l l t h e d e f e n s i v e f o r t s i n
10 comments
Read more

April 24, 2021
As we approach the last 48 hours of the Rad Zone Kickstarter we should reflect on how much we have added to the game and what current, and potential, new backers will receive when the campaign finishes. This is of course all added to the original content. 1.        The Search Matrix has been expanded to give the player more search results 2.        12 more characters are available 3.        Characters can now have Companions in game 4.        Journeys to and from the city now have more options 5.        And the new narrative rumour mechanism will add to the story! Key of course is that all backers will feel the benefits of these stretch goal milestones as they enhance the core rulebook. We must not forget as well that we have a core game that has flourished thanks to feedback on, and the interest in, the project. Kickstarter again has proven to be a motivational collaborative space supported by patrons who’s backing not only helps fund but also drive and design more origi
1 comment
Read more

February 17, 2021
Jo, our Logistics Manager, talks about how the latest DR Games and Dark Realm Roleplay Kickstarter is coming along. Digital rewards have been sent and the physical product is on the way. Jo explains. 10 Battle Mat Escape Rooms So, the Kickstarter has finished, and it has been a great success, surpassing our expectations. Now the fun part begins, having it printed, but who would have thought that could prove such a challenge. We had gone to our regular printers for the initial quote, but now we wanted to check board thickness, to laminate or not to laminate, whether it was worth it to collate and cellophane wrap, what box size would we need. All the details that I love sorting out, and these were all agreed pretty quickly. The maps were coming along nicely, and we would soon be ready to have a test copy printed. So far so good, but our regular printer did not do punch boards for the tokens from the stretch goals. So, time to find another printer. This proved much more of a challenge
3 comments
Read more