How do you announce the launch of a Kickstarter? Well here goes…let me introduce Expansionist. 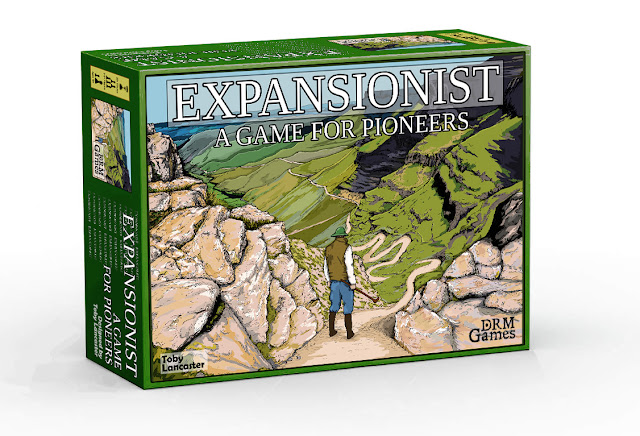 This is what I have working on for the last six months and it’s now on Kickstarter here:

Yes, it’s a tabletop game where you build settlements and expand beyond the mountains placing hex land tiles and event tiles to either upgrade your own settlements or download grade your opponent’s. Its evolution began with my map drawing at Dark Realm Maps. I’ve always drawn a wide range of maps and one of my ideas saw me creating land tiles. They seemed to spark people’s interest and I thought how cool this would be as a board game.

I’m going to talk more about the Event Tiles in a later post, but I came up with a mechanic which was based around them. On the face of it, it was straight forward but threw up a deep cycle of positive and negative placement tiles that quickly grew a matrix of the maps I so love drawing.

Expansionist is a game that draws upon many influences from computer games like Sid Myers Civilization to Settlers of Catan, from Zombies!!! to my RPG experiences, not to mention the hundreds of maps I’ve drawn and published over the last few years. Yet, it is none of these and I feel we have created an original game in Expansionist based around my own map style that has inspired many people and has the support of a community devoted to gaming.

One of the core aims of this game is to design something that played for about an hour. I wasn’t interested in creating something that was overly complex, as I have talked about in previous blog posts here. It can also accommodate many players, more than what the Base Box sets out to begin with. It truly has an epic scale.

If you have any questions, please let me know down below.

March 27, 2020
It has been on my mind for a while now as the Corona-virus spreads across the world . What can I offer those who are at home and unable to partake in their usual gaming sessions because of isolation. How can a creative mind help alleviate the stress of boredom and worry? I have seen other roll and write games and thought that might be a great way of giving something to the community to these very ends.    Looking at what I have previously worked on under the DR Games and the hex tile has been a feature. I decide that I would try and use this format, combine it with a number mechanism and inject it with a narrative. This became a scenario that fuel the fire of the story...and Dark Force Incursion was born.   " Y o u r l a n d h a s b e e n i n v a d e d b y a p o w e r f u l D a r k F o r c e . T h e s p e e d o f t h e i n v a s i o n w a s f r i g h t e n i n g , a n d t h e y h a v e t a k e n a l l t h e d e f e n s i v e f o r t s i n
10 comments
Read more

April 24, 2021
As we approach the last 48 hours of the Rad Zone Kickstarter we should reflect on how much we have added to the game and what current, and potential, new backers will receive when the campaign finishes. This is of course all added to the original content. 1.        The Search Matrix has been expanded to give the player more search results 2.        12 more characters are available 3.        Characters can now have Companions in game 4.        Journeys to and from the city now have more options 5.        And the new narrative rumour mechanism will add to the story! Key of course is that all backers will feel the benefits of these stretch goal milestones as they enhance the core rulebook. We must not forget as well that we have a core game that has flourished thanks to feedback on, and the interest in, the project. Kickstarter again has proven to be a motivational collaborative space supported by patrons who’s backing not only helps fund but also drive and design more origi
1 comment
Read more

February 17, 2021
Jo, our Logistics Manager, talks about how the latest DR Games and Dark Realm Roleplay Kickstarter is coming along. Digital rewards have been sent and the physical product is on the way. Jo explains. 10 Battle Mat Escape Rooms So, the Kickstarter has finished, and it has been a great success, surpassing our expectations. Now the fun part begins, having it printed, but who would have thought that could prove such a challenge. We had gone to our regular printers for the initial quote, but now we wanted to check board thickness, to laminate or not to laminate, whether it was worth it to collate and cellophane wrap, what box size would we need. All the details that I love sorting out, and these were all agreed pretty quickly. The maps were coming along nicely, and we would soon be ready to have a test copy printed. So far so good, but our regular printer did not do punch boards for the tokens from the stretch goals. So, time to find another printer. This proved much more of a challenge
3 comments
Read more